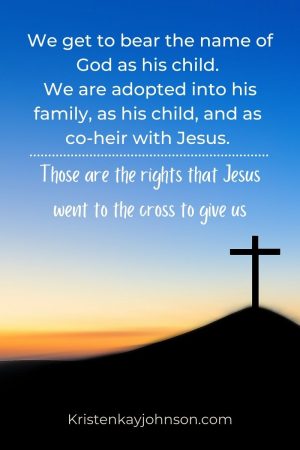 By now, you are all probably aware of how much I love worship music. In particular, I love songs that explain the gospel within their lyrics, and “Death Was Arrested,” by North Point Worship, is one such song. The more I studied the words, the more I realized that it is full of scripture references, first about our state before Jesus, then Jesus’ death on the cross, and then finally about the new lives we’re given when we accept his gift of eternal life. I mean, the first four lines, which are:

Alone in my sorrow and dead in my sin

Lost without hope with no place to begin

Your love made a way to let mercy come in

When death was arrested and my life began

… are a reflection of Ephesians 2:4-5 (and others!). “But God is so rich in mercy, and he loved us so much, that even though we were dead because of our sins, he gave us life when he raised Christ from the dead.” Good stuff right there!

But what I want to look deeper at this week is the line that says, “My orphan heart was given a name.”

I was recently reading in John 1 (one of my favorite chapters), and I came to this verse: “But to all who believed him and accepted him, he gave the right to become children of God” (John 1:12, NLT).

We talk a lot about our “rights” in society today. Many people are involved in the fight for equal rights, whatever that means to them, and are quite vocal as they stand up for their rights. We are blessed to live in America, where we “get” certain rights just because we were born here. That is the goal of the Constitution, anyway. We are entitled to certain rights when we become adults, and even my children receive some rights just because they’re my kids. (My yummy chocolate cookies, being one of them!)

Because we are so blessed, many people begin to feel entitled, like they deserve certain rights no matter what their actions are. Even if we don’t take that to the extreme, I know there are times when I have taken my rights and privileges for granted. And I know my kids have! 😉

But the right that John mentions, “the right to become children of God,” is unfathomable! God gives this right to all who believe in Jesus, not because we did a single thing to deserve it, but because Jesus did everything to give it!

We get to bear the name of God as his child. We are adopted into his family, as his child, and as co-heir with Jesus. Those are the rights that Jesus went to the cross to give us. It is mind-blowing when you stop and break it down.

Going a bit deeper, the Bible also mentions a time when Jesus gives believers a new name. Let’s look in Revelation 2. The “I” here is Jesus talking.

To everyone who is victorious I will give some of the manna that has been hidden away in heaven. And I will give to each one a white stone, and on the stone will be engraved a new name that no one understands except the one who receives it. – 2:19, NLT

When we believe in Jesus’ saving work on the cross, which makes us victorious over death, we are given a new name signifying the change, or as one commentary put it, “expressed the step which had been taken into a higher, truer life, and the change of heart and the elevation of character consequent upon it.” Name changes were common in the Bible. Abraham used to be Abram, but God changed his name after he established a covenant with him. Simon became Peter. Jacob became Israel. The new name was evidence that God was and is at work in the individual’s heart.

So, like the song says, “our orphan heart was given a name.” We received both a place in God’s family, as his child, and we were given a new name, signifying that God was going to be working on us, calling us higher for his purposes and his glory. What a glorious, undeserved gift!

We did nothing. He did everything. This week, and all weeks, may we take the time to reflect on this great gift, this right. May we remember to be thankful because, after all, “Jesus paid it all.”

The Beauty of Nature is No Accident

Jesus, Take the Wheel…in My Parenting