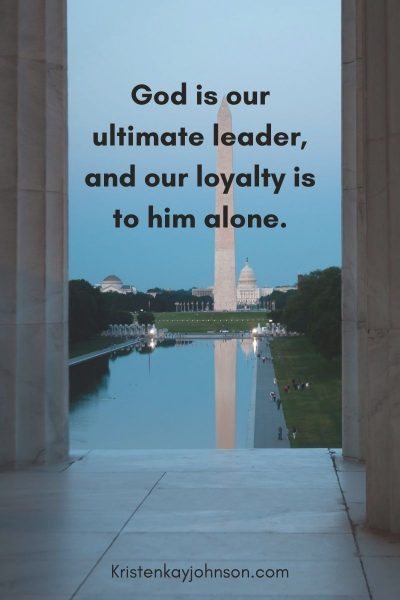 I’m writing this in the unknown. Like 2020 didn’t already have enough of that. Now, we’re waiting for votes to be counted and recounted, for the announcement to be made. Who will be the next president of the U.S.?

The goal of this post is not to get into party platforms or candidate talk. We’ve all had enough of that by now. But as moms, how can we teach our kids how God views politics? How can we teach them what the Bible says about it all?

I could really take this a lot of different directions, diving into each important issue and finding what the Bible says about it. Instead of doing that, I’m going broader. I’ve noticed that my 8 and 9 year old showed an interest in the presidential candidates. They wanted to know who my husband and I voted for. They wanted to know why we chose that. So, naturally, they want our choice to win. I’ve even seen them embodying some of the nerves that we all feel during this waiting period.

I got to thinking, “How can I lead my kids on a path of peace so that whomever is elected, they will feel alright?” I think that is something many of us are searching for these days.

In light of that,  I decided to focus on this overarching principle: God is our ultimate leader, and our loyalty is to him alone.

These are the things I think we should teach our children to help them understand that.

Jesus is our eternal King. Before Jesus was ever born, it was prophesied in Isaiah. Isaiah 9:6 says, “For to us a child is born, to us a son is given, and the government will be on his shoulders. And he will be called Wonderful Counselor, Mighty God, Everlasting Father, Prince of Peace.”

A couple things here. First, Jesus is everlasting. He lives forever. Second, “the government will be on his shoulders.” The Hebrew word for government means “rule or dominion.” Jesus, because he was and is and is to come, has established and ruled over his government forever. He will continue this on into eternity, when His new kingdom is established on this earth. In Revelation 11:15 tells us what will happens when that time comes. “The kingdom of the world has become the kingdom of our Lord and of his Messiah, and he will reign for ever and ever.”

All government is put into place by God. Romans 13:1b says, “For there is no authority except that which God has established. The authorities that exist have been established by God.” God can and will use any president or leader of the country for his ultimate glory and his purposes. Whether your choice wins the election, God is in control. He won’t be surprised when the winner is announced.

We should respect the president, but our loyalty is with God. The first part of Romans 13:1 says, “Everyone must submit to governing authorities” (NLT). Romans 13:2 goes on to say that we should not rebel against authority because if we do, we are rebelling against God since he put that authority in place. The president of our country should be respected. The laws of the country should be followed. But if we have to choose between obeying the government or obeying God, our loyalty lies with God. He is our highest authority.

For example, in the book of Daniel, chapter 3, three men named Shadrach, Meshach and Abednego were asked to bow down and worship a golden statue King Nebuchadnezzar made. They refused since that would be in disobedience against God. They were punished by King N, but God rewarded their obedience to him. That’s just one example of when it would be okay to go against the government.

Because we know Jesus is our eternal King who is in total control over the happenings of this earth, we have nothing to worry about. Things may get rough or difficult for us believers, but that should not surprise us. Jesus told us that already. He said in John 16:33b, “In this world you will have trouble. But take heart! I have overcome the world.”

The presidents and governments of this earth are only temporary. Our King Jesus is above them all! We can have peace in that, and so can our kids.

***Photo by Bob Bowie on Unsplash

Jesus: The Light in the Darkness

Why We Must Cling to the Character of God