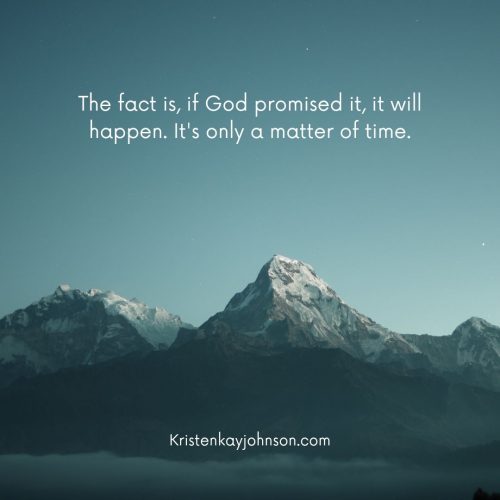 Have you heard your kids ever say these words?

Mine say it quite a bit. Lately, it’s not that I actually promised something and then changed my mind. My kids have a way of twisting what I actually said would happen and turn it into what they really wanted to happen.

They confuse me and make me question my own memory and my own sanity, which honestly, I question too.

One important thing I’ve learned in motherhood is never to utter those words unless I am sure that the event will undoubtedly take place.

Thankfully, we have a God that is really good at making promises.

We have a God that is really good at remembering the promises He makes.

And we have a God that is really good at keeping those promises.

I’m studying the book of Psalms this summer, so I am reading songs and prayers that King David wrote. I write a lot about David, but since God called him a man after His own heart, I think we can learn a lot from him.

David had been told he would be king of Israel when he was very young. But he had to wait many years for that promise to come to fruition. Not only that, even though he was God’s anointed king, he feared for his life. He spent many years on the run, hiding from the current king Saul who wanted to kill him.

David had such confidence in the Lord that he was already praising God for the promises that He would keep.

The fact is, if God promised it, it will happen. It’s only a matter of time.

David had complete confidence in God and His ability to keep what He had promised. Remember earlier in David’s life? David stood in front of a 9 foot giant with only a sling and some rocks. In the face of fear, David was confident that God would enable him to kill the giant Goliath. And God did.

We may not be faced with a literal giant, but we all face giant obstacles and trials. Right now, I am working to get a book published. That seems like a giant to me. But I am confident in the Lord. He will lead me and keep His promises to me.

What giant are you facing? A financial giant? Well God promised that He will provide for your needs. “So don’t worry about these things, saying, ‘What will we eat? What will we drink? What will we wear?’ These things dominate the thoughts of unbelievers, but your heavenly Father already knows all your needs” (Matt. 6:32).

Maybe you don’t know the next step with your job or with your children. God says, “If you need wisdom, ask our generous God, and he will give it to you” (James 1:5).

What has God promised you? Be confident; it’s only a matter of time before it actually happens.

The Beauty of Nature is No Accident

The Overwhelming Love of God